Holy crap, how the hell did I get through the off season? I mean, I was getting squirrely after one weekend without (real) hockey.

Chalk this one into the games that they should win, but won't be so bad if they loose because its not to anyone who's fans will make me hear about it (Stamkos Watch 2008 lives!). But if they do decide to, you know, play hockey and try for that last playoff spot, I can live with that.

Back To Our Regularly Schedualed Meandering

After an exhausting, yet satisfyingly All-Star absent weekend, I am back.
But I am also too lazy to write a decent, insightful or funny post (why should today differ from any other?). Thus you get more LolLeafs. 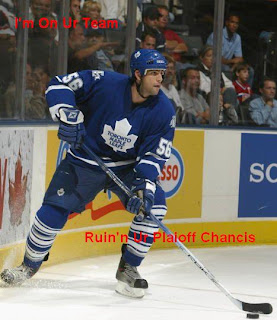 I am so lame sometimes.
Posted by Jaredoflondon at 10:59 AM 1 comment:

All-Star weekend, the super galla event of the year that everyone in hockey land is frothing at the mouth for.
The Super awesome Mad-Skillz competition with new slam-dunk, sure to not fall flat on its face shoot out.
The Intense and super exciting young-stars game that is just short enough to leave you wanting more!
And finally, the ultimate spectacle! The All-Star game. Featuring all your favourite NHL super stars, well except the ones that got injured....or withdrew....or weren't voted in because they aren't popular among the 'I voted 1000 times' 14-18 year old group. Filled with non-stop over passing, poor positioning and anti-climactic goals!

Unfortunately for me, I shall be in Windsor in a house with no cable, prepping for testing for new, more gainful employment. Shucks.

See you all on Monday!
Posted by Jaredoflondon at 8:30 AM 1 comment:

Now, dear readers, Know Thy Enemy goes into often un-traveled terrain in search of the elusive, yet every present Bruins Fan.

Bruins fans are interesting for the simple reason that they aren't that easy to spot. Unlike Leaf/Hab/Sen's fans they rarely drape themselves in team colours (they save those for special occasions). They also don't boast about their team. Sure they'll talk hockey, but unless you ask, it usually isn't evident that they are a 'B' fan.

They are the Ninja of NHL fans (little known fact, all Bruins, both Boston and Bear are trained in the ancient art of Ninjitsu. Zedeno Chara is the worlds most dangerous man and has been bared from the human section of the annual Bruin Ninja competition, he must now fight other bears.)

While not brash, the Bruins fan is surprisingly resourceful. They have no problem admitting when their team is lacking, but have a cunning way of tricking you into thinking your team is no better. Word play and a toothy smile is all they need to have you questioning your own team.

Like Leafers, the Bruin fan is loyal to a fault, displaying a quiet dignity through even the toughest of seasons much like the majestic Polar Bear . But like the gentle giants of the woods in which they take their name from, once awakened from their peaceful existence of shuffling around the concrete forest for Alexander Keith's Beer and Hawaiian Pizza (its favourite foodstuffs) with something like, say trading Joe Thornton, they become an unstoppable bear of a fan. A rampaging Bruins fan is enough to stop even the most stern Habs fan in their tracks.

Next month on 'Know Thy Enemy' we take a trip to Hockey town and explore the confounding Calamari loving Red Wingers.
Posted by Jaredoflondon at 7:01 AM 4 comments:

Hung Out To Dry

Well, JFJ's public hanging is finally over and I can't help but feel a bit sorry for the guy and the way he has been railroaded by the MLSE. Of course it was a necessary move, and the Leafs as an organization and as a team are probably the better for it (official view reserved for when new GM / President is named). 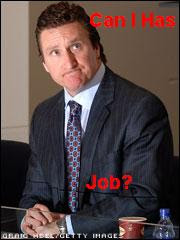 I wish JFJ all possible fortune in his future endevours, wherever they may be. I also mean that, but not in the hollow 'pretend I am a classy guy for the media' way that Peddie did.
Posted by Jaredoflondon at 2:51 PM 1 comment:

What do I want to happen tonight.....

Goddamnit, this used to be easy.

Last week it was "Tank Leafs Tank, get Loser Domi a tank! and fire everyone in upper management and expel their kids from school for having poor hockey management bloodlines!!"

Now they go on a winning streak (abit a small one) and I am somewhere in the middle. I still want my team to win, but I still want everyone in upper management to take a long walk off a short pier. Both desires have contradictory game plans. Winning = happy fans = hope at playoffs = no need to change the 'status quo'. Tanking = smash the establishment = rebuild = 2+ years of being the but end of jokes from Kings fans.

Son of a Bettman (I am currently trying to instill the word 'Bettman' as a curse).

This is for all you lolcats fans out there. 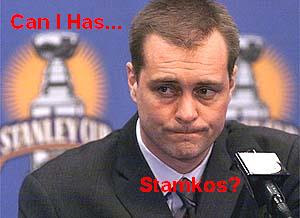 I am very bored today.
Posted by Jaredoflondon at 11:20 AM 3 comments:


Still makes me laugh all these years later, and the fact that the kid kinda looks like Jason Spezza (if you squint) makes it even better.

Oh memories.
Posted by Jaredoflondon at 9:28 AM 4 comments:

If You Don't mind

Please to take Mr. Peddie, Mr. Tenenbaum and any other MLSE members that you can fit in the trunk of your car with you when you leave. And forget them there.
Posted by Jaredoflondon at 8:16 AM 1 comment:

Are you kidding me?

There are no words for how goddamn frustrating that is.

For the first time, I am seriously contemplating my loyalties.

Seriously. Fuck You Richard Peddie, Fuck you MLSE. And Fuck you Batman, you should have stopped this.
Posted by Jaredoflondon at 2:12 PM 3 comments:

An open Letter to Andy Woznewski.

Please go away and never come back.
Posted by Jaredoflondon at 10:47 PM 3 comments:

Since my hockey team has failed to fill me with my weekly quota of awesome, I have nothing overtly positive or interesting to wright.
Thus I give you pure awesomeness in the form of Dragonforce.

Zoom forward to about 3:15 if you want to have your mind blown and not sit through the whole video.
Posted by Jaredoflondon at 5:51 AM 2 comments:

Well, here we are again. Fire him, trade that guy, abandon all hope ye who enter here.

Oh don't worry fellow Leafers, the Buds will go on a 5 week tear just to give us hope again and get back in the play off hunt and differ media heat, just in time for another huge down turn around the trade deadline.
This is a good thing though, it will up the trade in value of some of our (limited) assets.

Now get those Kings! Convince their management to take our goalie garbage....again.
Posted by Jaredoflondon at 2:20 PM 2 comments:

Tonight, the sliding Leafs face the Stanley Cup Champions.
With many a question surrounding their Captain and injuries again running rampant in the dressing room, not to mention half of Leafs Nation calling for an 'Infiltrate, Destroy, Rebuild' year, all is not well in Leaf Nation.
I stick to my guns, The Leafs will prevail.

Also, Bob Clarke, you're a Jacktard. Almost as big a Jacktard as Downie. You should have no complaints when he finally gets his comeuppance and someone runs him through the boards.
Posted by Jaredoflondon at 2:17 PM No comments:

An Open Letter To Andrew Raycroft:

Dear Andrew. Resisting all temptation to scream, curse and belittle you, I am trying as hard as I can to be objective. The fans hate you, the coach has replaced you with the guy he brought in to mentor our junior goal-tending prospects, and you appear to have lost all confidence in not only yourself but the players in front of you on the ice. Now, I don't blame you for feeling like this, since you have been hung out to dry more than an OCD's laundry and have been made to look like much worse a goaltender than you are....BUT.....It has come the time to do something about it. You have three options at this point in your Maple Leaf career. Since you are not the aggressive 'screw em all, I'll show em' personality choice one is to just plane give up. Let them drop you to waivers and hope that some other NHL team takes pity and sees that you aren't really that bad a goaltender and gives you a small market to rebuild your career in. Choice two, get back on the horse. Demand some game time and let the world know why you won the Calder cup. Even if you still loose every game, do it in a way that everyone knows you are not the problem, the defense in front of you is. Getting scored on on continuous odd man rushes and repeated power plays can't be pinned on the goalie. Just assert yourself and stop letting those fluke 'razor burn' goals in and maybe someone out there in a low rent team will see that you could be an asset to them.
Choice three. Sit down and think for a second. You are getting paid Two Million dollars a year to play a sport. That is a blessing. Not only a sport mind you, hockey the worlds greatest sport, and for the greatest team in said sport, the Toronto Maple Leafs. You, Andrew, are one lucky SOB. Living the dream of millions of kids world wide. Does it really matter that the fans and media are on your case? I can imagine the pressure you are under, but guess what, it's gone. from now on in, they already have an opinion of you. They aren't going to think you suck more than they already think you do. And that should be freeing. Why is that? Well I'm sure you've heard the terms 'nowhere to go but up' and 'nothing to loose'. Well those little ditties applies to you. Your competition is out injured, or sucking it up pretty bad, and you are a talented hockey player. Now, Andrew, it is time to step up and become number one again. Unless you think thats too much work, there is always choices one and two.
Don't become the next resident of Potvin Purgatory.
Posted by Jaredoflondon at 3:12 AM 2 comments:

Save us Jebus!
Posted by Jaredoflondon at 6:54 PM No comments: