*sigh* these seem to have caught on outside of me and LD, so I have to man up and throw down. 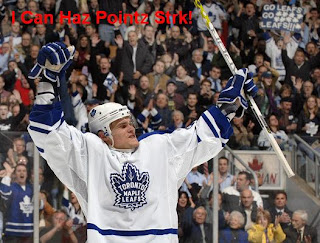 He also can has a delicious Cheese-Bourger. Mmmmmm.
Posted by Jaredoflondon at 8:40 AM 2 comments:

Labels: cheese bourger, LoLeafs, my little poni, throwing your hands in the air and waving them like you just dont care

Insane In The Membrane

I woke up this morning with a headache, and I knew it wasn't going to be a good day. I wandered out to the kitchen, found the pot of coffee was already empty, someone had drank it all. It just keeps getting better and better I thought. Then I heard laughter, coming from the living room, followed by a loud slurp. It could be no one else.

"Hey Buddy!" Myself greeted me as I walked into the living room, cup of coffee in his hand "Top O' the mornin' to ya"
"Whatever" I grumbled, swiping the near full coffee cup from his hand and taking a long haul, almost instantly feeling better.
"what the crap is your malfunction?" Myself questioned "Still sore from last nights loss of our beloved Buds?"
"No, of course not, that is to be expected"
"Bullshit, I saw that look in your eyes, the hope was there, last night was a grim reminder of just how untalented this team is, I just about bought you a pack of crayons"
"Quiet, you coffee stealing free loader, we both know the Leafs could have won if they'd sunk some of those chances. I mean if they had a legit finisher they would.."
"Stop right there Pocahontas, none of that one more peice bullshit, this team needs more than Rick Nash to become a cup contender"
"Rick Nash!"
"I said shut it, your not too bright this morning are you? A blindfolded Helen Keller could see that we are still at least two years away from threatening anyone for a playoff birth let alone a decisive run at Lord Stanley's mug."
"Your pretty negative today aren't you?"
"It's realism you ninny, this team finally has a few youngins' to build around, bringing in a Kovalchuk or a....Nash"
"RICK NASH!!!!"
"yeah... moving on, bringing in a player like that would be wonderful and all, but it won't turn this team into the 1997 Red Wings."
"But what if that player was Wendel Clark?"
"Exception to every rule, you know that"
It was then that I realized myself was the rational one, and that is never a good thing, so I went back to bed.
Posted by Jaredoflondon at 12:48 PM 3 comments:

Labels: need caffiene, RICK NASH, talking to myself, There is something wrong with my brain

Hey, go check out the link that this sentence doubles as.

It involves me answering funny questions written by attractive ladies.

DO IT!
Posted by Jaredoflondon at 8:48 PM No comments:

Pump up the base, pop some E and get ready for the latest instalment of Leaf-Alikes

Thats right, its My Name is Jonas Froggy Frogren / Markov 2.0 VS The Techno Viking.

Break it down.
Posted by Jaredoflondon at 7:26 AM 5 comments: 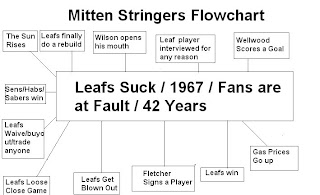 Posted by Jaredoflondon at 11:49 AM 4 comments:

This Is A Slow Jam

Burns, man, that guy was cool
Had a team that only worked hard
Wendel fought, Probert got burried
Felix Potvin was a goaltending star
Oh when I youtube now
That Spring, it seemed to last forever
And it isnt even a choice
Ya - Id always wanna be there
Those were the games days of my life

Back in the spring of 93

Wendel was killin teams
The Leafs were young and relentless
Our hope could not be defined
Fraser will burn forever - forever, yea

Back in the spring of 93
Posted by Jaredoflondon at 8:43 AM 4 comments:

Stajan: Hey, where the hell is Mark?

Poni: I do not know comrade, he say he coming over for pizza and sleep-over party last night, but he not come, Jason Blake even make him smores.

Blake: I wish you would stop addressing me by by full name.

Poni: Who is you?

Suddenly the chatter stops as a deep bass sound is heard, coming towards the room. The door swings open and in steps Ron Wilson carrying a boom box over his shoulder B-Boy style. DMX's Ruff Ryder Anthem Blaring from the speakers. Wilson is wearing his regular suit, but a huge gold chain with a massive Diamond encrusted Blue Maple Leaf dangling from it. He also sports two five finger rings with the words "Maple" and "Leafs" embossed on them with jewels and a pair of ridiculous Kanye West style sunglasses. He sets the boom box down and turns down the tunes so he can speak over them.

The team is shocked silent.

Wilson: I said wassup, you wack ass fools, don't y'all know you aught'a address yo coach when he axes you a quizzestion?

Wilson: Talk to me P.

Poni: Uh, coach, confused we is. Why you suddenly all shiny and talking like the big snoopy dogg?

Wilson: Thats simple you crack'a ass crack'a. I'm trying to inject a lil thug life up in y'all grillz.

He smiles revealing an over the top grill in his mouth with TML in diamonds on it.

Wilson: I gots dis fly brain wave last night after that crizzash and bizzurn y'all had last night. If we gonna get round to hangen' on to them two G leads, we gotta be bang' and hang'n tough. And what is mo bangin' than black hip hop culture? We gonna get our crunk on, West coast style!

Mayers: I find this offensive.

Haggman: Was that a New kids reference?

Steen: Do you even know what half the stuff you are saying means?

Wilson: I know that y'all is a bunch'a bustas, and I need y'all to be rollin' like OG's.

Antro: You may not want to do that Commerade, catch some interwebs cooties you might, Lenin knows where he has been.

Wilson:Ya'll is wack as can be. So to show you how OGs get down, I went and scooped me a hard core OG from the block, this bad ass mofo is straight up loco and he's gonna show you fools how to get down and dirty on tha ice. Fo Shizz.

Wilson opens the door again and calls out.

Wilson: Yo, MC Crunch, time to break these honkys off a lil somethin' somethin'.

Wendel: It's time to rain pain and hail hurt, bitches!

The room explodes in panicked motion as everyone scurries for cover.

Steen: PLEASE DON'T PUNCH OUT MY BLOOD, I NEED THAT FOR CIRCULATING OXYGEN TO MY VITAL ORGANS!

Poni: I HATE YOU SNOOPY DOGG!

Wilson smiles and cranks the tunes and raises the roof as the entire Leaf squad scampers around in circles trying to avoid Wendel, who is having too much fun scaring them to do any damage, except for Carlo, whose bones shatter every time Wendel utters a word. Eventually the team manages to find the door and run out, Wendel hot on their heals.

Labels: Dont look at me like that, fan fic, MC Crunch, There is something wrong with my brain
Newer Posts Older Posts Home
Subscribe to: Posts (Atom)