Doug Gilmour.
There is a name that means a lot to me. I say this with total and utter seriousness. Doug Gilmour made me the man I am today. Doug Gilmour is responsible for my work ethic, my stubbornness, my feisty never say die attitude and most of all my love of the game of hockey.
Like I have said before, the 1992-1993 NHL season and playoff run was the catalyst of my Leaf-fandom. At the tender age of 10 I became hooked on the Leafs and most of all hockey forever. Dougie is that reason.
The Ying to Wendels Yang, Dougie kept my young ADHD ass glued in front of that TV. Every time he touched the puck the excitement was instantanious, because you knew anything could happen.
Even at that young age, I realized something different about this numer 93 that separated him from other numbers, like 66 and 99. While the others excited me when they had the puck, it was because it looked so natural, so easy for them. Other players seemed but ghosts that they could walk through and around without trouble. 93 was different. Every stride, every turn, every dangle looked hard. You could tell he was trying so very hard. Every. Single. Shift.
Its not that I didn't think skill, anyone who could score 127 points in a season had skill. It was that he was using every last drop of that skill and more.
He wasn't big, but he wasn't affraid of anything or anyone. He'd grind in the corners with the gooniest of goons, and take faceoffs against those mystic double numbers that made it look so easy. And he'd win, or he'd die trying.
Wendel was a player that I could look up and admire, Mario was one I could evny, Gretzkey was one I could hate because he was just that damned good. Dougie was a guy who showed me that if I worked at it, damned be the person that try to stand in my way.
I modeled my style of play after Gilmour, and instantly was a better player. I was also having a lot more fun.
A couple years later, while at a Kingston Frontinacs game, my dad told me that Dougie was in the luxury box to the left of the home goal. I stopped watching the game and became transfixed. HE was there. My hockey idol was in the same building as me. At the first intermission I launched myself from my chair, shouting back at my dad that I was going to find Dougie. And find him I did. He looked like he hadn't slept in a week and was walking with a slight limp. But he smiled, shook my hand and signed my program. I wanted to thank him but I was too awe struck. Dougie stepped back into the box and I turned to see my dad with the biggest smile on his face I'd ever seen. I was super charged for a week telling everyone how I had met the greatest man in the world.
I met him again another year or so later, downtown Kingston during the Buskars. There was a crowd chanting "Cherry, Cherry, Cherry" and my dad and I wandered over to see what was up. Don Cherry was shaking hands and signing autographs and taking pictures. Then, out of nowhere, Dougie showed up. The crowd went nuts. I was again in awe and the next 15 minuites are kind of a blur. Dougie and the Don had blown my young mind. I don't even remember posing for the picture with them both, and some other punk who played for the Habs who jumped in. I hope my parents still have that picture. I want to show it to my kids some day.
When Dougie was traded, my heart was broken, but I never forgot what he taught me. When he returned I smiled so big for so long my face hurt for a month. When he was hurt, I felt physical pain. It was probably the hardest thing I have ever had to watch.
He retired not long after, Forever a Leaf, forever my personal hero.

Tonight, he gets the honour he deserves. If you see tears, yeah, I'm probaly crying. I'll admit that. Dougie means the world to me.

Thank you Dougie. Thank you.
Posted by Jaredoflondon at 1:48 PM 1 comment:

Labels: Doug Gilmour is the man you wish you were

Welcome to Leaf trader, your one stop shop for all your Leaf needs.

1980 Nick Antropov SUT
Untapped potential sure to treat you right. Works great on smooth highway or rugged mountain pass. Too many aftermarket parts to list! Asking picks and prospects, all offers considered. Won't last long at these prices.

1977 Pavel Kubina EXT
Reliable and roomy. Perfect for those long defensive hauls, but works just as well for a quick offensive jaunt. 2004 cup winner with its best years still ahead! Will trade for a newer model Bobby Ryan or Anze Kopitar. All trades considered.
Posted by Jaredoflondon at 1:45 PM 8 comments: 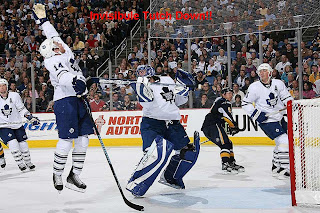 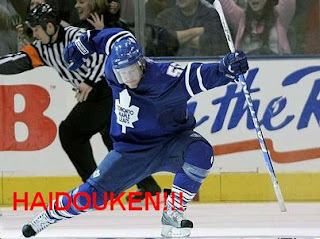 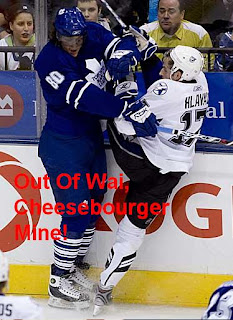 Posted by Jaredoflondon at 9:15 AM 7 comments:

- How many Habs fans does it take to screw in a light bulb? None, you don't need light when your head is that far up your ass.

- getting drunk for free is all sorts of kick ass.

- Luke Schenn is all sorts of awesome.

- Brad May will eat your children.

- My shoulder hurts, I don't know why.

- Late night TV is the suck.

- Dave Chapelle DVDs is the win.
Posted by Jaredoflondon at 11:45 PM 4 comments:

Recently, a certain someone has thrown down the LoLeaf gauntlet.
It's on like Donkey Kong! 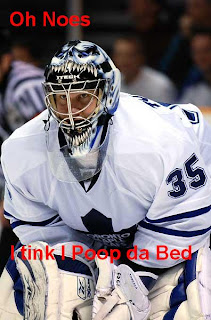 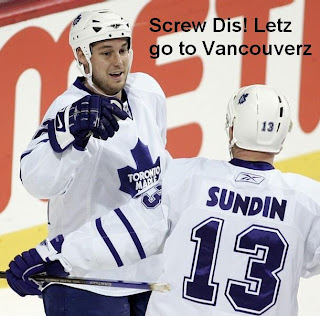 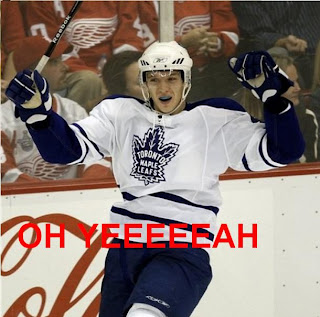 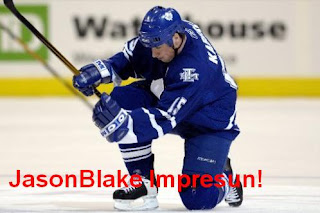 Posted by Jaredoflondon at 7:06 AM 4 comments:

Labels: i am the Darude of punk rock, LoLeafs, war ensamble

Being a Leaf fan hasn't been this easy in a long time.
Wait, wait wait, before you tune me out as another street corner crazy listen for a tad and hear me out.
Recently the venerable Down Goes Brown has posted about the stages of Leaf fan acceptance.
This got me a thinkin'. We have no expectations for our team. There is nothing left to defend, no excuses remain.
The Leafs just plain suck. There is no debating it any more.
How, you ask, does this make things easier? Well for one, when opposing fan bases berate you with "Leafs Suck!" you can turn to them and smile and with a smug look on your face go "Yeah, so whats your point?"
Finally, after years of mediocre presses to make the post season, the rebuild is on. For the first time in a long time the Leafs are doing exactly what we all want and expect from them, rebuilding, sucking, accepting that this year isn't gonna be anything shy of epic failure.

That sounds rather depressing you say? Well, maybe it is. That is, until you realize that you are now free to revel in the small victories without having even a small part of you thinking that if they put them together we might achieve large victory.
Here are some small victories to smile about.
- A top 5 draft pick is a scintillating reality.
- Schenn is the real deal, he may make some mistakes, but that's called being a rookie.
- Kulemin, while in need of some experience, has shown flashes of brilliance and is very strong on the Puck.
- Matt Stajan is leading the team in points, who'da thunk it?
- Grabbo looks to have both skill and a crazy streak, two of my favourite forms of entertainment. he also seems to hate the Habs alot something I love in a hockey player.
- Pogge hasn't been proven to be worse than Raask yet.
- Mikey VanRy has been excellent, when not eating through a straw.
- Harvy the Wonder Hamster has been revitalized and is now worth half his salary.
- Chris Didiminico looks like a steal.
- JFJ and Paul Maurice are not within 1000 kilometers of Toronto on most given nights.
- Ian Whites mustache.
- No matter how much the Leafs suck, the Senators suck more.
- There is a cure for herpes, and it is the St Louis blues.
- It can only get better from here on out.

So buck up Leaf fans. There is light at the end of the tunnel, and now I don't think it's a train.
Posted by Jaredoflondon at 6:55 AM 5 comments:

Labels: sunshine lolly pops and rainbows everything thats wonderful is how i feel

It's me, Jared. We need to talk Vesa, no no no. Not about designer hand bags and bitchen shoe pant combo's like usuall. We need to talk about you. You're a very likable guy Vesa, your also quite the tallented goaltender. But your not getting shit done. Does that sound framiliar? You know a certian Razor sharp ex-Leaf goaltender who we shipped off for sucking it once he got the number one spot.
Seriously Vesa, we know you can do it. We saw last year that you can pull a decent string of games together on a regular basis. Hell we've even seen this year how you can pull out a solid wall of a game and look like an all-star.
We as Leaf nation are growing concerned. What happened? Or what is happening? Is your groin still wonky? Has the bunneh gotten too chubbeh? Or have you been playing above your head for a long time now and are just comming down with a realistic, permenate case of the sucks?
I had hoped that you could be a part of this team and it's re-build, but with this lacsidasical effort, it probably won't work out.
You know what these letters mean. I'm sorry Vesa, but it's over. It's just a matter of time.

It's A Draft Year!

The 2008/2009 Barilkosphere draft has been rather interesting this season.
There have already been three huge steals thus far, marked most recently with the surprise pick up of Loser Domi by Barry Melrose rocks, they traded up from the back of the pack with Melt Your Face Off for future considerations.
Earlier all of Leaf Nation won huge with the second over all pick in snagging, previously un drafted Canucks prospect Wrap Around Curl, who possesses an excellent skill set on all parts of the blogsphere and is known for her quick release and love of goalies.
First over all, of course, went to PPP who picked up "Jammies" Chemmy of the Darcy Tucker fan club giving them a solid one two punch down the middle that compliments their huge plethera of roll playing commenters very nicely.

Who will be picked up next? This is a very deep draft this year with several highly pursued bloggers itching for a chance at the big time. Offensive tallent like Blurr of the California Left Coast lock and Stud defenseman General Borskevski are still available. There is also dark horse picks like Sean of Down Goes Brown, who some scouts are toughting as the next James Mirtle and JaredFromLondon, an excellent aggitator with lots of offensive upside but his work ethic and disciplin have been questioned by some scouts.

Look for Blogs like Hockey Analysis and Melt Your face off to make some big named trades, while PPP is far from done. Rumour has it that they have their eye on Kim Jorn of Cox block to bolster their anti-media line. He Score He Shoot have been rather quiet latly, but are said to be activly shopping Moose.

Further updates as the come.
Posted by Jaredoflondon at 10:00 AM 6 comments: