Hey, did you know that the Leafs just got some dude named Brian Burke as their new GM? I know right? This so came out of nowhere. I hope he knows what he's doing and has some experience. I mean its not like I've had his draft and team building Record smashed over my head for the past few months.

So, Like any normal person, I thought, what players would I pursue if I were put in Brian Burke's shoes? What draft pick would be ideal? Who would remain as veteran Leafership? Who would stay?

Here are my top ten Burke should do's.

1 - Get a top 3 draft pick, through trades or luck of draw (or suck of the team) the Leafs should be determined to land one of Tavares, Hedman or Cowen
2- Get a secondary top ten draft pick, this is a deep draft, go for gusto.
3- Get rid of Ryan Hollweg. Make him a salary dump, a buy out whatever, and give his spot to Devaux
4- Persue either Rick Nash or Kovalchuck (you all know who I want more) with reckless abandon.
5- Save Dustin Tokarski from the Tampa system, attractive female insider information has informed me Tampa has no real intrest in this Gem of a goalie. Its Tampa for crapsake, we should be able to get him for a coke and a smile.
6- Find a suitable goaltender to threaten Toskala for number one, or atleast will be a more ample backup than Cujo and a reasonable price.
7- Lock up Antro
8- Get as many prospects and picks as you can for whatever you can, but ensure you leave one of Kubina or Kaberle on the back end. Their leadership may be needed on the back end.
9- Give Pogge 5 games this year. Near the end (if he is playing well enough to deserve in in the AHL) Give him a taste.
10- Cut off Peddies hands if he tries to stear the good ship Maple Leaf at all. No warnings.

And then I woke up and realized my pillow was gone.
Posted by Jaredoflondon at 3:01 PM 8 comments: 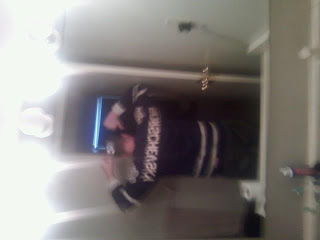 Yeah, thats right it says Borschevsky on the back, Big pimin indeed.
Inexplicably there is no numbers, but considering I paid $5 for it and there is no damage, I am not gonna complain
Posted by Jaredoflondon at 5:43 PM 9 comments:

LoLeafs- Not So Funny Edition

Since Matt Stajan has now lost his last two BFFs he isn't too happy, just look

Hey go to the link that this text doubles as!

Apparently that's another blog I write out, go read it, its good stuff!
Posted by Jaredoflondon at 10:22 AM No comments:

Yes, dearies I am still around, I have just been spending my energies else where as of late. Working on a secret project if you will. I was originally going to keep it a surprise and unveil it when completed, but teasing is ever so much fun.
So here you go, a taste of what I've been working on.

Posted by Jaredoflondon at 10:18 AM 6 comments:

Labels: batman is a scientist, secret squirrel, spoil the surprise

The Top 5 Funniest Things That Could Happen This Season.

In not particular order

5- Burke could sign in NYC and the mitten stringers would have to eat their hats.
4- Grabbo wins the Calder, Montreal insists he is a terrible player and a cancer, look stupider than usual.
3- Jason Blake impresses some team enough to take a trade for picks/prospects.
2- The Leafs make the playoffs and Cliff is still able to swindle a top 5 pick out of some team.
1- Both Schenn and Grabbo get Calder nominations and everyone who isn't a Leaf fan insists we have no good young tallent.
Posted by Jaredoflondon at 6:18 AM 4 comments:

I was at the jersey store today, deciding on what Leaf to get put on my first reebok jersey (Schenn ahead of Grabs turns out) and I noticed that there were a couple jerseys from other teams that a part of me actually considered buying. I know, blasphemy right? But I know some of you out there have considered it so don't string me up yet, wait till the end of the post.

Since lists are fun, I decided to make one.
The Top 10 Jerseys from other teams that I wouldn't mind wearing.

1- An Ovie jersey, no explanation needed.
2- A Wayne Gretzky Oilers Jersey. You cannot deny the awesomeness that was 99 on the Oil (wearing void in Western Canada)
3- A Gordie Howe Whalers Jersey. Whalers = Awesome, Gordie = legend. Jersey = the Bomb.
4- A Steve Yzerman, Dude is the best leader in the history of hockey, screw you Messier.
5- A Joe Sakic Nordiques jersey. Supporting our Hab hating unfortunate team loosing brethren and honoring one of the best players of our time.
6- A Timmu Selanne Jets jersey (see a trend yet?). Arguably the best European player ever, and it pays tribute to my Northern friends in the Peg.
7- A Joe Thornton Sharks Jersey, just to rub it in my Bruins friends faces.
8- A Rick 'Motherfuckin' Nash jersey, so I could rip of the BJ's logo and sew on a Maple Leaf.
9- A Shane Doan Yotes Jersey. I have a mild man crush on Mr Doan.
10- An Alexander Daigle Sens Jersey with #1 on it to rub in in their faces. Just kidding I'd rather have a speeding bus for dinner than pull a trojan over my head.

Note: All other Team jerseys must be worn with a Leaf T-shirt underneath and a Leaf hat on, so everyone knows your real affiliation.
Posted by Jaredoflondon at 10:51 AM 12 comments:

LoLeafs - I Hate You're Face Edition 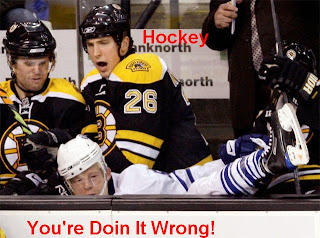 That is all
Posted by Jaredoflondon at 1:08 PM 7 comments:

For The Good Of Man Kind

This has been a long time coming.

Dear Toronto Mitten Stringers., All of you....Some more than Others.

Where do I start? Really, there is so much I could write to you, so much I could complain and rant and rave about. I'm not going to mention any names, because I don't believe in calling people out.
Like many Leaf fans and Leaf bloggers, I've hit the wall with you recently. This simply isn't a case of one bad apple spoiling the whole bunch either. Many of you have, for a long time, been lazy and/or borderline offensive in your workings. Your writing is sloppy, your arguments weak and your reasoning lazy and flawed.
Now don't get me wrong, not all of it is bad, many of you write some good stuff. Some of you manage to do it on a consistent basis. I can even understand the drive to write the anger inspiring drivel that has become common place. When you write an article like that, you get a ton of positive response from all the anti-Torontites out there, the Habs fans, the Sens fans, what have you, and you get a negative response from us Leafers. That equals a ton of buzz about what you write and sells papers, gets ratings and even gives you a zillion hits online.
The sad thing is, that isn't journalism, its not reporting, its not even good writing. You are paid to be professionals. You are paid to get the truth and report it, sometimes give your own slant and comment to that effect. You are also paid to back up what you say with facts, and or logical reasoning. Spouting 1967, 40 years, Harold Ballard etc over and over again is lazy writing and you know it. Your goal should be to be the best you can be.
You want to just sell papers, and be moronic go ahead, there is nothing I can do to stop you. We'll still be here. True Leaf fans don't buy your garbage, and with wonderful fellows like PPP, DGB and the Cox Bloc boys out there, we are fighting the fight in our own way. There is strength in numbers, and logic. We have both, and nothing you can write will change that.
I'm not asking you to do anything drastic, like quit, or become something you are, I just want you to stop being so lazy and write the way you can write. You can still be negative and rip on the Leafs yes, we actually don't mind that at all. Just have a valid argument supporting your negative approach. Back it up with facts. Build some legitimate sources that aren't anonymous, that will actually give you some validity. You will still get all the anti-leafs congratulating you and you will still be the object of our disdain, but at least we will respect you as journalists, Hell you might even get more hits as self respecting Leaf fans who have boycotted your work (IE me) will again come back to read your stuff.

How hard can it be? No harder than it was for me to not rant and rave and swear at you in this letter thats for sure.

Clean up your fucking act you douche bags!