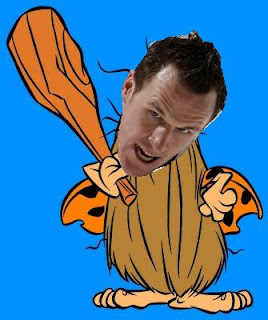 I for one welcome our new rock banging overlord
Posted by Jaredoflondon at 5:43 AM 3 comments:

Well, here we are, at an impasse of sorts. For the umpteenth time this season this little corner of the net has been, how you say, desolate. Why you ask? Well to be blunt (and a bit joint, maybe a teeny bit spliff) I have had zero drive to blog, write or create anything Leaf related. In fact, I had decided about a month ago that Die Hard Blue and White was going the way of the Dodo.

D as in ding dong the witch is dead. Hell I even had a good bye and farewell readers post written up.It was emotional, I got a little misty even. The best before date was set at today actually, end of the season, after the cup, I was dropping the hammer.

But then, dear readers, something hit me. A mystical force bitch slapped my brain like a Laperriere shot block.

“What the fuck kind of lazy ass quitter are you?” I thought. “This is bullshit, you are bullshit, stop being such a fucking donkey and man up moose. What do you think Burke would say?” Truth be told I have no idea what Burke would say. Probably something along the lines of “who the fuck are you? Get the fuck out of my office” and then he would shoot me or something, but I digress.

Quitting is for suckers , fools and Sucka fools. My mamma didn’t raise no sucka fool, so I am keeping this bitch a float. I can’t really say “I’m Back” because things they be a changing around here. The reason things got so bogged down round here were two fold.

One: the Leafs blew chunks all over the place which made them no fun at all to write about.

Two: I fell into a boring ass pattern of tired jokes, shitty gimmicks and forced humour.

Not to worry, your old favourites such as the open letter et all will remain staples of the site but things are going to be a little....well lets say sporadic, not in actual posting, no I promise this time that there will be plenty of updates, just the material will be less focused than it has been in the past. I know, scary right?

So hold on to your butts, even I don’t know where this is going, and I couldn’t be more excited to write.

Labels: and I mean it this time
Newer Posts Older Posts Home
Subscribe to: Posts (Atom)