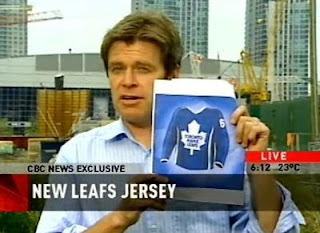 Well it seems that everyones favourite paper-mache penalty killer has finnally found a new home.
Trading in the Blue and White for a Blue Jacket.
Didn't see that come'n did ya?
I wonder if they will be able to find a way to make his masking tape and tissue paper physique retain composure throughout the entire season. Maybe rubber cement? A Q-Ray?
Or maybe they will reform him out of liquid metal, creating the P-1000.
His mission will be to destroy Sidney Crosby, and only Gary Roberts can save him. This fall, prepare yourself for.....The Penguinator.
Posted by Jaredoflondon at 8:05 AM No comments:

Goodbye and So Long 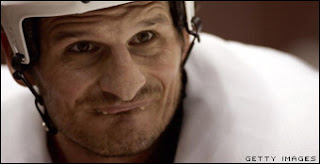 The NHL's ugliest player Mike Ricci has retired, making him the NHL's former uglies player I guess. That puts him soundly in the running for ugliest NHL player of all time (giving Gump Worsley a run for his money).
That leaves one dire question un-answered, who is the new king of Fuglyiness? To me it comes down to Dominik 'Skelator' Hasek and Ryan 'I kissed a blender' Smyth.
feel free to voice your own votes in the comment section.
Posted by Jaredoflondon at 8:02 AM 4 comments:

I just had one of those "wait a second, you stupid TV, what did you just show me?"
moments, followed by me furiously trying to rewind the channel by pressing a random button on my remote.(note, much like last time, this didn't work).
This is what I sawed.

Watch the last guy in the Yellow Neon closely, I swear that is Goldberg the friggen goalie from the Mighty Ducks movies, the voice seems a bit off though....I need to go watch that movie again for a comparo.

The investigation continues.
Posted by Jaredoflondon at 10:00 AM No comments:

Since there is EVER so much going on in Leaf land right now, I thought it time to look back on what has been accomplished this off season and where the Leafs now (potentially) stand.

First, lets dive back a might farther than that though, to the summer of 2006. What did we get? A new coach a new "number one" goalie and two hulking defensemen.

Verdict
I am still a big fan of the Paul Maurice decision. He is young (for a coach) but does know what he is doing, and I like his fitness approach to the team. Five / Five

Andrew Raycroft. *Sigh* oh Razor, we took a chance on you but you weren't what everyone demanded of you.You did get that wins record, but wiffing at high glove shots.... You get one more season before you delve into Alan Bester territory. Two Point Five / Five

Halvel Gillbina. Not Chrott Progmeyer, not even Brymas McCaberle. Both are good defensemen, and will be better this year, I guarentee. Price tag still a bit hefty though. Three /Five

Now we come to more recent dealings, the stifling summer of oh seven .

The more I think about it, the more I like the additions of Mark Bell and The Tosk. I really do. Mark Bell may have been a salary dump, but one mans trash is another mans treasure. He has the makings of a steady mid - 20s goal scorer. Last season he had a bit of a rough time, but thats nothing a fresh start shouldn't cure. He wont feel too much pressure since everyone in TO has pretty much forgotten about him since the arrival of St. Jason Blake. Bell will be able to quietly work on his game and develop into an excellent second line winger. Will be worth the Two Mill. Four / Five
The Tosk. The Tosk is a good goaltender, but is untested at the starter gig for more than a stint at a time. But then he was dueling for number one against Nabokov, one of the NHL's premier goaltenders (anyone who says otherwise is wrongo bongo). Getting shipped to TO gives The Tosk something he has probably been hungering for. A viable shot at a starter roll. He has all the tools, the experience (internationally anway) and isn't adverse to pressure, but then there is nothing like the Pressure cooker that is being a Maple Leaf. Three Point Five / Five
Now the crown Jewel of the Maple Leaf additions. St Jason Blake. He was the main reason I didn't like when the Buds played the Islanders (well until DiPietro caught fire anyways). I don't pretend for one second that I think he will reproduce his point totals from last year, but do think he will get in the high twenties low thirties with ease and crack 60 points. He is fast, very fast, just what the first line needs. Responsible defensively and excellent at riling up the enemy, the combination of him and Tucker in a one / two line combo will have other teams seething and off their game. He's not the messiah that will bring the Leafs the Cup on a platter, but he's the Saint that will give them a chance at causing some post season damage to the hoighty toighty Sens and Sabers. Four Point Five / Five

Pre-Season-Predict-O-Matic Says - The Buds Finnish 6th in the regular season, get knocked out in the second round of the playoffs in 7 games in a blood feud like series with the Sabers.

That is all.
Posted by Jaredoflondon at 12:41 PM 2 comments: