In their ever relentless search for even more ways to gouge the loyal Toronto Maple Leaf fan base, the MLSE has come up with a new way to ensure their cash flow.
Opening soon in a city near you, the Toronto Maple Leaf Restaurant! We here at Die Hard cannot divulge too many details, but we have been authorized to give you a sneak peak at the delectable menu that will be available to you.

Appetizers
- Aki Garlic Berg - Extra large Garlic bread, sure to leave a bad taste in your mouth for a long time.
- Toskala Salad - an attractive arrangement with fashionable toppings, you'll laaaike it, you'll laaaike it alot.
- Schenn Nachoes - Fully loaded with everything you could want, get ready for your stomach to be body checked by taste. May cause unwanted pregnancy.

Entrees
- JFJ Whistle Dog - A limp chicken dog on a soggy bun, comes with a No Movement Clause from your stomach.
- Mats Sundin Surprise - A delicious meal that is whatever our indecisive chef decides it to be. no guarentees on how long it will take to cook.
- The Wendel Clark Burger - Fantastic, but very unhealthy. The most dangerous thing on any meny anywhere, it will probably kill you just for ordering it.

Beverages
- Kule-Aid - a refreshing summer beverage with only one flavour.
- Curtis Joseph Wine - A poorly aged vintage that was awesome 10 years ago.
- Fruit Cox-tail - A sour drink made mostly of foam. We carfully recycle the leftovers every time someone fails to finish this delectable drink to ensure we never have to make it fresh, but you'll keep coming back for more. Its your fault it sucks. $19.67
Posted by Jaredoflondon at 4:33 AM 10 comments:

Hey Y'all
Remember those rosters I did up a bit ago? Well much has changed since then.
Here is how I see things sitting on opening night, the remix, now with more truculent Bass.

Poni - Stajan - Blake = This line stays put, Stajan isnt a 1st line center, but he has more chemistry with the other players
Kulemin - Grabbo - Hagman = Man Grabs Lemon lives as well
Tlusty - Walin - Stempniak = Kid line is delegated to the marlies, except Tlusty, who needs better ice time than this, but will probably see 2nd PP unit time
Stewart- Mayers - Orr = KKND, thats all the opposition will see

Kaberle - Schenn = Schenn gets the bump to first pairing, well because he is awesome
Beauchemin - Komiserik = total death for the rivals top line with a little offensive punch
Exelby - Finger = this was hard because I honestly thing VanRy deserves at least 2nd pairing status, but this is how I see Wilson setting the lines if the roster stands pat.

Goaltending Dual
Toskala - Starts out as the number one, but quickly becomes a 1A goaler
Gustavsson - I wouldnt be shocked if he got the first start just to see what he has.

Relegated to last chance AHL duties - Pogge, kid is gonna have to prove he can get mentally tougher and can compete with some stiff competition from Reimer for ice time.

I been slackin' on the LoLeafs as of late, also the Luke Schenn content could always use a boost.
that is all the warning you get*

* blogger not responsible for unwanted pregnancy or liquification of underwear, offer good In All US States and Canadian Provinces excluding Quebec and Alaska.
Posted by Jaredoflondon at 8:32 AM 5 comments:

It had been a while since I'd seen him, and that wasn't a bad thing. But this morning when I got home from work, there he was. Expecting to find an empty apartment and a comfy bed, I found him.
At first, he didn't notice me, nor I him, but I did notice the mess. Dishes, empty bottles and general clutter everywhere. then he came out of the kitchen and I stood face to face with myself.
"Hey jackass!" he said in his all to friendly way "where the hell have you been?" I sighed
"You know where I've been smartass, the draft, camping, you know having a life"
"ah yes, the draft, I saw the pictures, the camera seems to remove 10lbs in your case" he poked at my stomach and I slapped his hand away "Speaking of hockey, what do you make of Mr Burkes first summer as the Leafs GM thusfar?"
"Well the draft was awesome, hooked up with a good crew. I was expecting more movement from Burke and admittedly wanted Cowen, but I couldn't be happier with Kadri, or Burke absolutely owning Murray on national TV"
"He's a bad mother..." he paused, looked at me like I should do something.
"what?" I asked, to tired to deal with this bullshit "never mind, Yeah, Kadri is sick. What about free agency? You think we have enough D yet?"
"God what a log jam. This defense is going to punish the hell out of the opposition. Beachemin will be an instant fan favourite, same with Orr. I still have mixed feelings about Komiserik, he still has Hab Douche stamped on his forhead."
"What about the Kubina trade for Garnet 'smash your face with my elbows' Exelby"
"Another enigma, I can't wait to see him turn some Ottawa Senators into dust, but his reputation for being dirty and taking himself out of position has me woried a might" he snorted at me.
"whats so funny?"
"You are such a girl" he said with a giggle "ok their Jason Spezza"
"Hey! Low blow!" he recoiled, mocking offense.
"besides, I continued, this Defense is already 100% more defensive and potent against the rush than it was last year, what ever happens with the extra bodies, be it trading for picks or prospects, or even moving Kabby for a top 6 forward, in Burke I trust "
"how about Rick Nash?"
"go die in a fire"
Posted by Jaredoflondon at 9:03 AM 5 comments:

Labels: in burke i trust, talking to myself, There is something wrong with my brain

This Is Why We're Hot

RED WITH RAGE
I abide in the pit of woe
Crucified in the Abyss of Woe
And for my crime, this is my time
My unholy...crime

The cycle of torment the pleasure of sin
Licking the lap where my load must begin
I rode a tide of vengeance that could never be denied
Hail the crimson blur - violence has arrived!

RED WITH RAGE
I abide in the pit of woe
Crucified in the Abyss of Woe
And for my crime, this is my time
My unholy crime

The trail of our campaign attracted great scorn
But we ventured onward through the Tundra of Tor
Soon I had attracted a posse of trolls
Who'd grown fat and sloppy from the roasting of souls...

The mutilated millions I was born to appall
Heads leap from shoulders as they flock the mall
The Butcher of Bertok, Infernal Throne
Laid waste to usurpers 'till I stood all alone 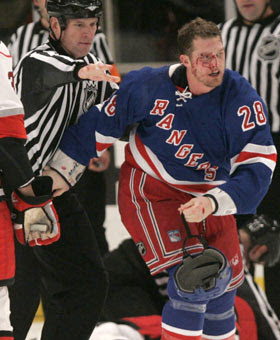 RED WITH RAGE
Posted by Jaredoflondon at 5:43 AM 3 comments: