As far back as I can remember, the Leafs have been accused of being minimal in the talent department. And really, I cant fault anyone for saying that, a few players excepted, Toronto has had very little top flight All-Star skill.

But things are changing. How you ask? Well just look at the Olympic camp rosters from around the world and you will notice something kinda shocking yet totally awesome, a plethora of Leafy goodness.

Lets investigate shall we?

10 Players and 2 prospects, not too shabby, also lets not forget outside shots like Jason Blake and Lee Stempniak for team USA.

Say what you will about the Leafs chance at victory, but sufficient to say, more than a few will be adding a medal to their trophy case this season.

Posted by Jaredoflondon at 11:15 AM 5 comments: 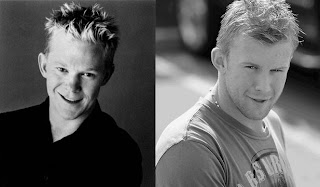 Hey remember these? These cheap little quasi-creative photographic side by sides that make it look like I'm coming up with new content when I'm just being lazy and happened to notice a vauge similarity?

Who does he look like? What? you mean you dont know? That's just super star actor Greg Pitts, AKA the "O Face" dude from Office Space.

I know right?
Posted by Jaredoflondon at 5:43 PM 1 comment:

This is the first time in a while I can look up and down the Leafs line up and say I like every single player on the roster. I down right love most of these guys, to varying degrees for random and sometimes ridiculous reasons. I thought I might share it with the world in my own little way.

Why I love each Leaf, in 4 words or Less.

Labels: i made lasagna it was delicious, lists are fun, not funny

When people discus the mysticism of the Toronto Maple Leafs, it usually involves some aspect of how storied the franchise is, how magical Grabovski's mane of hair is, one of Luke Schenn's various miracles like turning water into beer and his enemies blood into dust or even how the vengeful god Wendel may strike down someone with fist shaped lightening bolts.

Today, it has a different meaning. As recently as last season, around the same time as the mysterious disappearance of Alexander Steen and Carlo Colicacovo, many have claimbed to have seen something on the ACC ice. Something not found in any Leafs roster or dressing room. One photographer managed to snap this picture.

While many believe it to have been faked, or simply Ryan Hollweg in the shower, it has been since dubbed the Stempnisquach.

The Stemnisquach. or Yet-Lee as it is also known, has developed a cult following of sorts. Scientists have scoured the Air Canada Center looking for proof of the creature. Mysterious clues have been found, but all have been debunked.

The first was strange skate marks in the ice surface, but then they realized it was a hockey rink and that was normal. Also the Zamboni resurfaced the ice before any plaster castings could be taken. Then it was believed some of the creatures droppings were found in a luxury box, but it turned out it was just some pudding filled with Oh Henry Bars stashed by Kyle Wellwood that had gotten old hardened up.

While evidence of the Stemnisquach remains elusive, many true believers hold steady that one day, the creature will be spoted and genuine footage of it scoring at the pace told of in legends St Louis.
Posted by Jaredoflondon at 7:57 PM 6 comments:

Labels: go banana, silly jared, there is a large out of focus monster on the loose and that is extra scary to me

Roundabout Rumour Round Up

yeah...
As some of you may know, and others may not know, and yet even more may even suspect a little, I love me a good trade rumor, especially when it centers on my beloved and betrothed Maple Leafies. So I thought I might discuss a few of my favourite ones with a little break down, because I know how much y'all love to do the hockey player shuffle.

Situation Evaluation - Do Not want

Reasonable Reasoning - This "deal" has plauged the interwebs since draft day, and has recently been shut down as possible by both sides. But it won't die. I blame Leaf fans for REALLY wanting to happen. Can't say I blame them, Kessel is a young, exciting very skilled sniper. Something the Leafs really need. But I don't want him in a Leafs uniform, not currently anyways. Kessel is an unsigned RFA, with no deal in sight traded for Kaberle he'd still be an RFA. and I don't want to take the chance he walks and the most tallented Leaf defender is gone for one meaningless year of Kessel (no way the Leafs are cup contenders this season). Where the deal done for a reasonable year to pay ratio I might bite, but not till.
Also there is the fact that the Bruins after the trade would be no better off cap wise, Kaberle's salary would still put them in the red and another deal would have to be made. Losing Kessel would make it all the much harder to part with other now more important peices of their current roster. If Kessel goes, it will be for cheap prospects and high picks. Two things the Leafs SHOULD NOT part with unless there is an absolute steal coming back.

Forcast - Clear skys with no chance of swaping.

Situation Evaluation - You've got my attention

Reasonable Reasoning - Vinnys salary is a real albatross here. 7 mill cap hit for another 10 years.
Yup, a whole decade. Vinny is, however, a great hockey player, when he is on his game he can be the best player on the ice no matter who he squares off against, and when he is bad he's still probably the best (at least against the Leafs). It has been repeatedly stated by Tampa management that they have no intrest in moving Vinny, which makes sense, he is their franchise. The package that would take to pry Vinny away from the Bolts probably starts at Schenn AND Kabby and works its way up from there, which is totally rediculous and not worth it at all. The Lightening find themselves in a up comming pickle though, Vinnys trade value will probably only decrease with time, and sooner than later they have to man up moose and sign Stamkos and Hedman to pro contracts which will no doubt be lucrative.
There is also the undeniable fact that Tampa's managers are certifiably insane and nothing is off the table when it comes to them it seems.
There are several more teams out there who could/would offer far more enticing packages for Vinny, Montreal being one who would almost certianly over bid the Leafs in any prospective deal.
Crazy contract, super high price of admission.....but damn how much would that piss off Habs fans?

Forcast - A Storm is brewing in Florida, but assistance and aid from Toronto not likely


3 - Kaberle to Blues/Columbus/ Vancouver for their respective futures.

Reasonable Reasoning - All three of the mentioned teams will be pressed to improve upon their recent seasons, all three are ripe with NHL ready prospects that could step to the big club now or next season and have a good chance at creating an impact AND all three teams are in varrying degrees of desperate for a veteran, proven puck mover for their back end. Burke will no doubt be asking for more than one prospect for Kaberle, and it wont be a middling one. A blue chipper in the form of Hodgeson, Berglund or Brassard will no doubt be on Burkes shopping list, all of which are rumoured to be non-starters for a trade.
I would be surprised if neither side budged on any deal.
Another point of thought is the VanRyan / White factor. Neither would bring the return of Kaberle, but could be packaged with other assets to bring some skilled youth to the Leafs front end. Somethings gotta give, but what? Lets hope its the spirite of Burkies rival GMs

Forcast - Clouds with a 30% chance of raining prospects

Disclaimber - I love Kaberle
Posted by Jaredoflondon at 9:23 AM 4 comments: