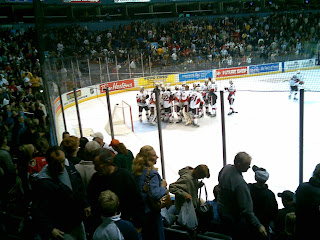 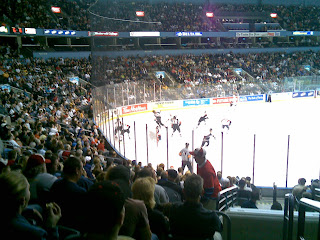 1)An easy victory, group hug!
2)moments before Neil gets crushed behind the net
3)The Sens take the ice
4)Nytimaki (or whatever) looks to rebound after a brutal first (for those unaware, it didn't happen) 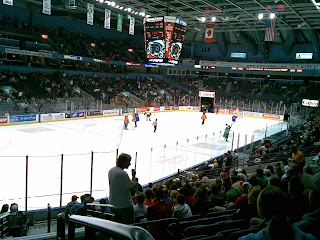 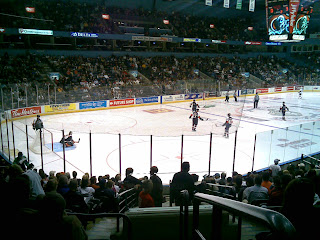 Posted by Jaredoflondon at 6:51 AM 2 comments:

The Kings beat the Ducks 5-4 in the Pre-Season opener.
Hockey is back!

It's about GD time.
Posted by Jaredoflondon at 11:20 AM No comments:

Four office workers stand around the water cooler on their break, one is a Habs fan, One a Senators fan, one a Bruins fan and the last a Leafs fan. They shoot the shit for a while and the topic of house painting comes up.
"I was actually thinking of painting my garage this weekend, what colour would you guys suggest?"
askes the Bruins fan.
"Red" says the Habs fan, "Pink!" chimes the Sens fan. "white" suggests the Leaf fan.
"white? what a stupid suggestion" exclaims the Bruins fan.
"Yeah" The Habs fan continues "what do you know anyway, you like the Maple Leafs, they havn't won a cup in 40 years!"
"Yeah! your team sucks, they haven't made the playoffs in two years" Quips the Sens fan.
the three chirp away for a while.
"what a shitty team they are"
"Your goaltending is horrible"
"worst team ever"
"40 years what a joke"
"playoffs!"
Finnally the Leaf fan has had enough.
"Oh Fuck you guys" he exclaims and he goes back to work.

The three others sit there in silence for a second, then the Sens fan turns to the Habs fan.
"Wow, Leafs fans are assholes eh?"
Posted by Jaredoflondon at 9:57 AM 1 comment:

I haven't gone too deep into this for one reason, I never had all the facts, I still don't.
But I know more than I did before and feel its time to speak out on it.
First off let me state that I in no way shape or form support drinking and driving, or am excusing what Mr. Bell has done.
From my mighty perch on my keyboard I have checked round y'ond intraweb to try and get as much information as I could, I have seen the interviews, read the articles and heard the rumours.
What have I discovered? Mark Bell duce'd up, he duce'd up large. He drove while intoxicated and was involved in an accident in which an innocent was injured.
But then he man'd up. Plead no contest and took what the judge gave him, now he is taking his lumps in a substance abuse program combined with an indefinite suspension from playing in the NHL.
Knowing nothing about the guy other than what I have been spoon fed from the media, I can say that he doesn't seem like a bad guy, he doesn't seem evil or dangerous, I mean the guy was named Chicago's man of the year in 2005 for his charity work PRIOR to the incident.
Thing is, even good people do stupid things, inexcusable things. Is Mark Bell a good person? I don't know, I have never met him. Does he deserve to get off light because he is an almighty NHL player? Hell no. But I refuse to judge before the hammer falls. If he pays his dues, if he gets his life turned around, If he can move on, then doesn't he deserve a chance? Look what Danny Heatly has been able to do (note: I am aware comparing the situation is apples and oranges and I actually LIKE Heatly, so don't crucify me, its just an example about how someone can come back from something that could destroy ones life or career.)
Posted by Jaredoflondon at 12:14 PM 2 comments:

The newest Leaf, I welcome him even though I know nothing about the kid. I can't wait to see him play just to listen to Bob Cole and Harry Neal butcher his name up something fierce.

What can I say, I am easily entertained.

Posted by Jaredoflondon at 3:19 PM No comments: