Breaking news from the Die Hard Blue and White news center. Brian Burke is at it again, scouring the world for unknowns that can benefit his hockey team. Sources are reporting that Burke has inked action star Jason Statham to an entry level contract with the Toronto Maple Leafs. Seen below practicing, Statham showed why he is one of the most sought after movie stars of today. 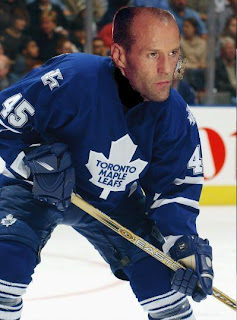 He scored several fancy shootout goals on an unknown goaltender (to be discussed later) which included back flips, skating up the boards and using random foreign objects in the heat of the moment. Statham refused to answer questions after his astounding first time ever on skates but released this brief statement "How'd you like that one, tough guy? How fricking awesome was that, huh? "

The biggest surprise was yet to come however, when the goaltender Statham had been shooting on made his way off the ice and removed his mask. 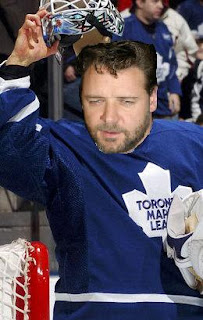 Mr Crowe refused to even make a statement, but muttered about throwing a telephone at our reporter if he didnt get out of the way.
When asked to coment on the Crowe situation, Burke stated simply "We are always on the hunt for new tallent, there is a current veteran gap in our goaltending situation with Cujo leaving after last season. Crowe caught my eye, and plays with the same edge that he uses to fight around the world. I believe he will be a great asset to this organization".

While the total lack of hockey experiance of either of these players is glaring and obvious, Statham's raw, unconventional skill and Crowes obvious physical zeal will at the very least prove entertaining to watch in the upcomming season.
Posted by Jaredoflondon at 6:14 AM